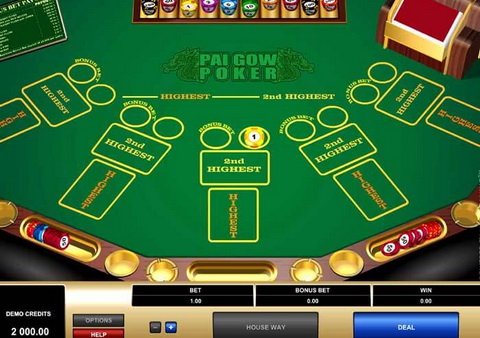 How to play Pai Gow poker?

The modern game of Pai Gow is similar to Poker in many ways. This is a relatively new game to North America. However, it has been around for virtually thousands of years, and certainly longer than most of the other casino games we know. Since its introduction into the casinos of Nevada in 1983-84, it has increased in popularity in an almost dramatic fashion, and very much so in the last five to ten years. So, how to play Pai Gow poker? If you are interested, you can read about Roulette rules in the next article.

Pai Gow was initially introduced to meet the pent-up demand of the Asian gambling market and, at first, was played almost exclusively by knowledgeable Asians. Most other regular players were mystified and intimidated by it, especially when they saw it was played with dominoes, and required unfamiliar sets of gambling skills.

Since that brief era, however, Pai Gow has evolved. Nowadays, most casinos that offer Pai Gow use standard, familiar casino cards, not dominoes. As a result of this change, and North Americans’ love of games, Pai Gow, increasingly, is being embraced by growing numbers of serious players.

The player’s objective in the game of Pai Gow is to win two separate hands. Which he has created from seven cards dealt to him, by beating the two hands. That hands the dealer has formed from his similarly dealt seven cards.

Pai Gow is played on a table with an overall layout similar to that of a Blackjack table, but it is larger. Like the Blackjack table, it can seat seven players. The house dealer stands on the side opposite the players.

How to play Pai Gow poker?

Pai Gow poker rules: Pai Gow poker is played with a deck of 53 cards. I.e., a standard 52-card deck plus a joker that is used as a wild card. The dealer plays one player, at a time, just like in Blackjack, but that is where the similarity ends. The selected player starts the game by placing his bet in a small marked area in front of him. There is no pot.

The dealer deals the player seven cards in a row, face down, then deals himself seven cards, face down. The player and the dealer divide their individually dealt (seven) cards into two playing hands, according to suit and rank, as in standard Poker. One hand must comprise five cards, and the other hand, two cards.