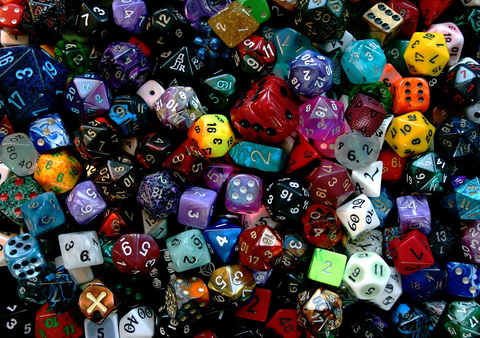 The North American game of Craps is known variously as Bank Craps, New York Craps, Las Vegas Craps, Hazard, Chicken Hazard, Chuck a Luck, or just plain Crabs. It is easily the most raucous, animated and physically vigorous game in the house. It has true personality. Not sure what the Craps rules for dummies are yet? Watch a game for a minute or two and you will be struck with its colorful outbursts, player interaction, and the unbridled excitement that few other casino games enjoy. The atmosphere is immediate, informal and charged. If you are interested, you can read about Blackjack rules in the next article.

Craps differs from most casino games in other ways too. The players stand; there are no seats. Any number may play. Every round of wagering is the same; unlike Poker or Blackjack, there are few tactics one can attempt. There is no bluffing. The key player, i.e., the guy who throws the dice, is called the shooter. The other players may bet, but for the most part they are spectators with their attention fixed on the gyrations of the shooter, and the roll of the dice. And, oh yes, the game has three casino employees at the table to ensure things run smoothly

There is only one shooter, and he doesn’t play against the house, the dealer, the other players, or even himself. Every player and round of play focuses on the roll of the fickle dice. And the dice can determine winners and losers every time they are thrown. So let’s start to learn what is the craps rules for dummies.

How to play craps at home? The Object of the Game

In its simplest form the object of Craps is to win any bet laid on the table that is based on a personal expectation that the very next roll of the dice will come up exactly as bet.

There are many ways to bet and various rules and odds affecting each type of bet, and the resulting payoffs are determined accordingly. Some experts insist that Craps has the lowest overall house advantage of all the casino games. At the same time, it is unquestionably a complicated game with many rules. Here is the best advice, especially to newcomers. “Study the game with due care until ready to pick up the dice with both eyes wide open.”

The Table and Dice

Firstly, the game of Craps is played on a rectangular-shaped table with low, padded walls around it. It is played with a set of two, precision-balanced, six-sided dice. The dice are made of a cellulose or similar plastic material. Each side of each die (cube) has one or more dots (spots) totaling one through six. The combination of the six spots, plus the number of dice in play, determine the mathematical probabilities of any number being thrown. The combined spots on opposite sides of a die add up to the number seven. I.e. six and one, five and two, three and four.

The shooter, who stands at one end of the table, starts each game by making a bet. He signifies his bet by placing cash or chips on the appropriate part of the layout before he rolls. The other players may bet on the shooter, against the shooter or make side bets on the outcome of the roll. Once all bets are down, the shooter takes the dice in one hand and tosses them the length of the table, from one end to the other. He must ensure that both dies are thrown hard enough to strike the opposite wall of the table and bounce back onto the surface of the table.

At the instant the dice come to rest, the dealer declares the number rolled. That all-important number is based on the combined sum of the spots on the topmost surfaces of the dice. And all winning bets are paid accordingly.

Those spots on the dice also determine whether the shooter wins, loses, continues to throw, or loses possession of the dice to another shooter. If he wins, he may continue to bet and roll. Or he may decide to quit, and give up the dice. Either way, each player in turn gets the chance to become the shooter and toss the dice in an attempt to roll a winning combination.

Although variations of Craps are played in Europe, notably England, France, and Monaco. Bank Craps (Las Vegas Craps), and New York Craps, are the versions of the game played most often in the major gambling casinos in North America. All of them use specially designed tables and easy to read printed layouts. And all bets are made against the house.

Craps rules for dummies in this video.